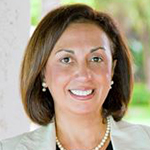 Silvia Z. Mitchell is associate professor in the Department of History at Purdue University. She specializes in early modern European history with a particular focus on the history of the Spanish Monarchy in the later seventeenth century (1665–1700) from national and international perspectives. Fascinated by queenship as a history of female political power and the influence of royal courts on political, cultural, and diplomatic history, Mitchell emphasizes the role of women of the royal House of Habsburg in shaping European international politics.

Born and raised in Buenos Aires, Argentina, Mitchell completed all her academic training in the U.S., first at Florida International University, where she received a B.A. (2001) and the M.A. (2006); and then at the University of Miami, where she was awarded the Ph.D. (2013). She joined the Department of History at Purdue University in 2013, where she teaches a variety of undergraduate and graduate courses on early modern European history. In 2019, she received the Jon C. Teaford Faculty Award for excellence in teaching history and was the 2017 and 2018 History Department’s nominee for the Purdue University Early Career Teaching Award.

Mitchell’s book, Queen, Mother, and Stateswoman: Mariana of Austria and the Government of Spain (Penn State University Press, 2019), is an in-depth and fully archival-based study of the regency and exile of Queen Mariana of Austria, analyzed as a distinct period within the reign of her son, Carlos II (r. 1665-1700). In this work, she highlights the active role Spain played in European international politics and Mariana’s part in reversing Spain’s financial and political difficulties during a period of uncertainty. Mitchell is also the guest editor of the December 2018 special issue of The Court Historian: The International Journal of Court Studies, the leading periodical for the interdisciplinary field of court studies. Titled “The Spanish Habsburg Court during the Reign of Carlos II,” this collection of articles investigates Habsburg etiquette traditions during the rule of a child-king, the role of royal and aristocratic women at court in the queens’ households, and Carlos II’s court as a hub of international diplomacy. She is the author of several peer-reviewed articles and chapters on queens, women, and diplomacy.

Mitchell is the co-convener with Erica Heinsen-Roach, University of Florida, of the International Symposium, “Ibero-Dutch Entanglements in the Seventeenth Century: Conflict and Collaboration in Global Perspective” that will meet virtually in September 2020.

She is currently accepting applications from graduate students interested in early modern Spain and its empire in the sixteenth and seventeenth centuries.