Every spring, the Women's, Gender, & Sexuality Studies Program hosts an Awards Celebration.  In 2018, we were excited co-host a joint celebration with the Center for Research on Diversity and Inclusion Office. This joint effort gave us the opportunity to celebrate the exceptional students from many areas across campus. WGSS recognized awardees for the Outstanding Senior, Undergraduate Leadership, and Berenice A. Carroll Feminism, Peace, & Social Justice graduate and undergraduate awards. The celebration was held on April 12th and we proudly acknowleged all of the winners!

Berenice A. Carroll was a professor of Political Science and Women’s, Gender & Sexuality Studies Program at Purdue University and a professor emerita of Political Science at the University of Illinois, Urbana- Champaign. Berenice Carroll's main fields of interest were peace research, political theory, and feminist politics. She served as President of the National Women’s Studies Association and on the editorial board of the National Women’s Studies Association Journal. She was co-editor of The Political and Social Thought of Women: An Anthology (Bloomington : Indiana University Press, 2000). She also had numerous publications on topics relating to women, non-violence, and power. In addition she had over one hundred appearances as lecturer or presenter, chair or discussant, at professional conferences, workshops and symposia, universities, radio and television interviews in the United States and abroad. In addition to her impressive scholarly accomplishments, her commitment to Feminism, Peace and Social Justice is of particular import to those of us here today as Berenice was instrumental in the creation of women’s studies program at Purdue and served as Director of the Women’s Studies program between 1990-2000. She continued her social justice work through her efforts with the Lafayette Area Peace Coalition and Historians Against War.

The impetus for the Berenice A. Carroll Feminism, Peace, and Social Justice Award came from a symposium in November 2007 at Purdue University held in honor of Berenice.  The Award is intended to foster and recognize contributions to scholarship and activism that are related to engagement with feminist studies, peace studies, and other social justice issues.  They aim to honor Professor Carroll’s contributions to teaching, scholarship, and activism including anti-war, feminist, pro-ERA, anti-sweatshop activism, to name a few, by recognizing those students involved in feminist or social justice work—be it purely academic, purely activist, or a mixture of both.

Tiwaladeoluwa Adekunle - is recognized for the project "The PMS Project:  Exploring Communication's Role in Social Constructs Around Menstrual Health of Women"

Amber Lusvardii - is recognized for the project "“The End of Child Bride: Social Movements and Strategic Action on Underage Marriage”

Meghana Rawat - is recognized for the project “Shea Moisture’s Crisis: A Case Study of Racialized Organizational Identity and Identification”

Claire Glenn - is recognized for the project "Take Back the Night"

Claire LeMonnier - is recognized for the project "IFSA Internship Reflection and Review:  How Time as a Resource Impacts Gender Inequality"

Kadari Taylor Watson - is recognized for the project  "Afr"ican Prints as Voice, Visibility, and Community:  A Comparative Study of Ghanaian and African American Women in the 21st Century"

Heather Murton - is recognized for pedagogical project of celebrating sex-positivity as a mode of feminist praxis.  She argues for the inclusion of sex-positive discourse as well as lessons about consent in sex education programs

Jesse Bohlin - examined the Virginia Kelley Archives, Exponent archives, and engaged in oral histories to uncover the history of LGBTQ people at Purdue and the change they enacted at an institutional level.

“Sandra Cisneros Latinas I Tell You My Story Project”

L'eica Frederick, "The End to Gender Violence:  A Grassroots Movement"

Each year one WGSS Graduate Teaching Assistant is given this prestigious award. This award honors graduate students with teaching responsibilities from across campus for their dedication to Purdue students and their outstanding teaching contributions.

We are pleased to announce that the 2015 Graduate Teaching Excellence Award, sponsored by the Center for Institutional Excellence, is Dana Bisignani. 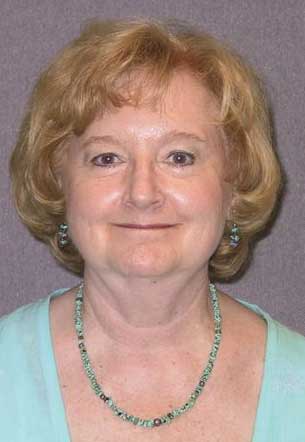 The award is named after Carolyn Perrucci, professor of Sociology and Women’s Studies affiliated faculty who has been involved with the program since its inception.

Every other year Women's, Gender, & Sexuality Studies program offers an award to a graduating WGSS major with a high Grade Point Average who also has been involved in progressive campus co-curricular activities, especially in feminist programming, and activism, thus realizing feminism’s foundational concepts of feminist theory and practice.

To apply: Submit an essay of one to two pages describing how feminist concepts have informed or inspired your political or community activism, and the ways in which your activism reflects what you have learned in women’s, gender, and sexuality studies. Include a transcript and a brief cover letter. Submit materials to Terry Bean, wgss@purdue.edu. Deadline is Friday, March 12, 2021. The prize will be awarded at the WGSS virtuaI awards ceremony on April 28 at 4:00 p.m.

Outstanding seniors are nominated by WGSS faculty for this annual award.

Emily Tiede is a Women’s Studies Major with minors in sociology, organizational leadership supervision and LGBT Studies.  Emily received nominations for the Outstanding Senior Award from WGSS faculty and faulty associates based on her tremendous involvement with the program.  For example, Lowell Kane noted, “Her Participation in the study abroad was stellar, and her leadership and service at Purdue goes above and beyond most students I know.”

- Kelsey Froehlich is a third year student double majoring in Women’s, Gender, and Sexuality Studies and English.   “As a result of taking WGSS classes, I have a new perspective on the world and my future career, one that involves working directly to eradicate violence and human trafficking.”

Kelsey traveled to Africa last summer as a member of the WGSS in Uganda study abroad/service learning program. This picture of her was taken on the volatile border between Uganda and the Democratic Republic of Congo, where Kelsey worked with the Center for Women in Governance (CEWIGO) to gather data on violence, rape, education, and female representation in government for the United Nations.  While in Kampala, she also interned for Raising Voices, a grass-roots organization devoted to combating domestic violence against women and children.

Back at the Purdue campus, Kelsey is a member of Generation:  Justice and is applying her new international feminist perspective on violence as well as her growing expertise in the field of Women’s, Gender, & Sexuality Studies to collective efforts to end human trafficking and modern day slavery.  Some of these efforts have her going into the community to talk with students younger than herself:

“It was frustrating to me that I wasn't aware of such crimes in the US and internationally until I got to take WGSS courses in college, so I hope to be able to go into schools and talk to students who are in high school or middle school so that they can become aware at an earlier age than I was when I was first introduced to the issue.”

-Tiffany Gavros was selected for the Outstanding Senior Award because of her unrelenting pursuit of social justice and academic excellence. In addition to serving as the president of the Feminist Action Coalition for Today, she participated in the inaugural Women's Studies in Uganda study abroad program. While there, she successfully completed a three-week internship with Action for Development, a feminist organization that promotes women's leadership. In recognition of Tiffany's outstanding leadership potential, she was selected for the highly competitive "Teach for America Program and will begin that adventure in the fall".

The WGSS Undergraduate Leadership Award is determined by the WGSS faculty.  In 2015, they were so impressed and pleased with the student leaders contribution to our community that they decided to recognize three student for their feminist contributions to Purdue University and the wider community.

The winners of the 2015 WGSS Undergraduate Leadershiip Award are Dana Smith, Jamilyn Lemish and Emily Fogle. Congratulations to all of you and thank you! 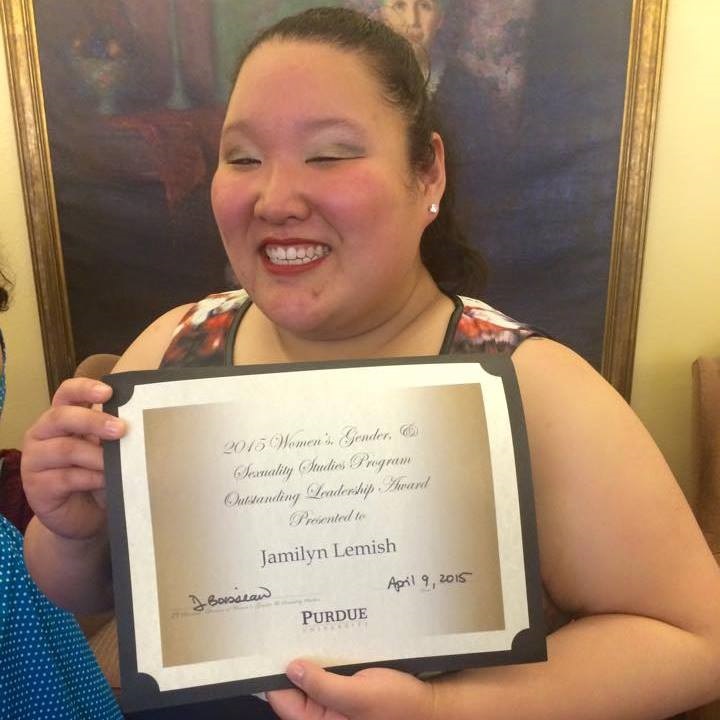 Stephanie Scott was selected for the Undergraduate Leadership Award because of her deep commitment to feminist activism. She is an active member of the Feminist Action Coalition for Today and has participated in numerous social justice campaigns on campus. This summer she will be interning at the Center for Women in Governance as part of the Women's Studies in Uganda Program.