The African American Studies and Research Center at Purdue University is devoted to the theoretical and practical encouragement of themes of identity and community as they pertain to the African American experience. To foster dialogue on these issues, the Center has sponsored annual conferences devoted to critical discussion of the development and implementation of concepts of community and identity.

The award is presented annually during the African American Culture and Philosophy Symposium.

The award has been discontinued due to a lack of funding, but we do wish to continue to recognize previous recipients.

History
Since 1985-86, the African American Studies and Research Center has coordinated the identification of an annual recipients(s) for the Remmers Award. This award has been made possible through the H.H. Remmers Memorial Fund established in 1969 to honor Dr. Remmers who had been head of the Division of Educational Reference and a member of the Psychology Department. The Remmers family had stipulated that the income from the fund be used to assist "Afro-Americans who are pursuing graduate study in the social sciences, men and women, providing the amount of $500.00 per calendar year." In 1998, the family graciously agreed that the award be increased to $1000.00 each for an Afro-American doctoral and masters student level. In addition to the two 1993-94 recipients, the program will also honor our 1992-93 doctoral recipient who was not selected until after last year's event. Each year, the selection committee solicits nominations from the heads of the social science departments, including Communications, Psychological Sciences, Political Sciences, Sociology/Anthropology, and Audiology/Speech Sciences. Nomination criteria include consistent and outstanding academic progress as well as academic, professional, and leadership potential. 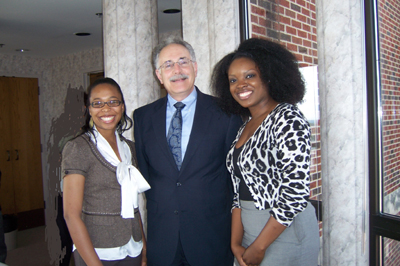 Barnes, Sandra. The Cost of Being Poor: A Comparative Study of Life in Poor Urban Neighborhoods in Gary, Indiana (SUNY Press: 2005). Buy it now

Dr. Antonio Tillis is the author of "Manuel Zapata Olivella and the 'Darkening' of Latin American Literature"
Click here to buy the book