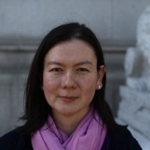 Margaret Mih Tillman’s research focuses on cross-cultural contestations over identity formation and knowledge production in China in the twentieth and twenty-first centuries. Her monograph, Raising China’s Revolutionaries (New York: Columbia University Press, 2018), charts the transnational establishment of child welfare as a lens for examining the introduction of new sensibilities about childhood innocence and sentimentalization.

Tested, her current research project, explores the ways that Chinese youth responded to curricular changes regarding academic promotion; a major focus of this story is the transnational establishment of educational psychology as a discipline and its innovation in testing and contests as a result of wartime experiences. Grants from the American Council of Learned Societies and the Taiwan Fulbright have funded this research.

Her work has also led her to examine some transnational issues, including diasporic labor in eighteenth-century Cuba and postwar UNESCO.